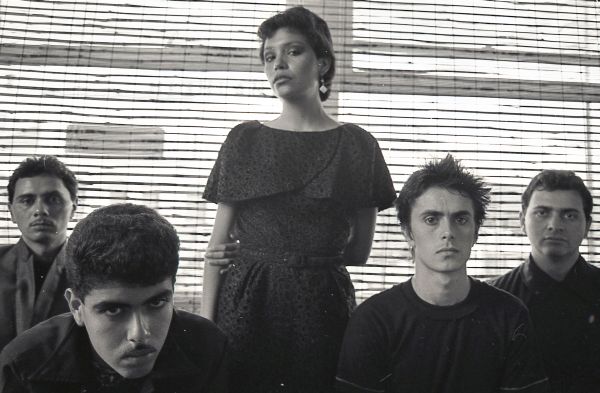 From their conception in 1979 to their eventual break-up in 1985, The Brat contributed to the customization and inter-meshing of multiple musical and cultural models that culminated in the distinct East Los Angeles, Chicano punk sound. The Brat, a hard-working and politically-conscious band, nurtured the DIY punk scene of East L.A., which was defined by unofficial venues and backyard shows because the wealthier West L.A. circuit controlled the popular market.

By the time the famous Club Vex was founded in 1980 – by Los Illegals frontman Willie Herron, who desired an official venue to host East L.A.‘s numerous underrated bands, who were mostly Chicano – The Brat had become one of the biggest acts in the area. In late 1980 The Brat was signed as the flagship band of the upstart label of another local punk group, The Plugz’ Fatima Records. This collaboration resulted in The Brat’s only recorded album, the EP Attitudes, a five-song collection of some of their popular originals featuring Covarrubias’ aggressive, yet melodic, punk vocals critiquing social inequality and Rudy Medina’s – who was called Rudy Brat – urgent guitar hooks over drums with a reggae feel.

The Brat never found breakthrough success and remained an underground East L.A. Chicano act until breaking up in the late ’80s.

The Big Takeover is pleased to premiere a live performance clip of “High School” by The Brat, the song of which appears on Straight Outta East L.A., a new CD/vinyl album coming out on August 25th via MVD Entertainment Group and RockBeat Records.

Straight Outta East L.A. contains all 5 tracks from the long “out of print’ Attitudes EP. The rest of the songs were performed and recorded during the few years The Brat were together, but were never released until now. Most of those recordings were unmixed or were left unfinished until members returned to the studio and finished the songs in recent years.

‹ Finally, after many decades…